Knowing how to cook lentils to make sure that they’re perfect for your meals can be tricky, however once you know how to do it , it's really not that complicated. You will love these delicious legumes and all the recipes that go with them.

Lentils are a small type of legume. A legume is a plant or class of vegetables that contains an edible seed that is, itself, protected by a surrounding outer skin. They can be sold with or without that seed coat, as well as whole or split.

You can buy precooked lentils in a can or package however I love using dried ones and cooking them myself. This pantry staple is a common ingredient in Indian dishes and Middle Eastern cuisine but also a great side dish for dinner.

This is a bit of a tricky question to ask since there are so many different types (we’ll talk about that in a little bit). Lentils have an earthy flavor but tend to absorb a lot of cooking liquid during the cooking process, so any dish containing them will have wonderful flavor from the seasonings they are cooked with.

They are a great vessel for all my favorite spices and flavors. I like to cook my lentils in chicken or vegetable stock and add fresh herbs or bay leaves to the cooking liquid.

With those qualifiers in place, certain lentils do have generally different tasting notes. For example, the brown ones taste quite earthy, green ones taste peppery, and red ones are on the milder but sweet tasting side. These notes come out best when the legumes are cooked exclusively in water, so they aren’t flavored by any external spices or herb.

There are many varieties of lentils out there - twelve, to be exact. However, it’s unlikely that you’ll use all of those during your cooking experiments. Instead, I will take you through a few of the different types of lentils you will see in your grocery store or market.

This type of lentil is probably the most common of all. They hold their shape well while they’re cooking, plus they have a fairly even, mild, and simple flavor that makes them pleasantly versatile. The primary flavor of brown basic lentils would best be described as earthy and creamy.

They work well as a stand-alone side dish, though they can be used by being tossed in salads, added to soups for heartiness, and pureed and seasoned into an interesting sauce.

Red lentils vary in color from an orange yellowish color to bright red. They have a sweeter flavor overall, and they tend to break down almost completely during the cooking process. Because of this, they are often used for soups, Indian dal, and curries. These don’t have a protective coat, so they typically don’t take very long to cook.

Quite similar to the brown variety, they are a pale green-brown color, similar to dried peas. They stay relatively firm during the cooking process, and when fully cooked they typically have quite a mild and neutral flavor. They remind me a lot of yellow split peas and I sometimes substitute them in my Split Pea Soup with Ham recipe. They are a bit more convenient also as the cooking time is a bit less.

These tiny legumes are olive-green with black mottling across the surface. They generally taste quite vibrant and powerful, which is said to be due to the properties of the soil in the Puy region of France, where they’re grown. I have never tried these before but it's on my bucket list to go to France so that might be the time.

They are well-rounded, which means that they hold up the best during the cooking process. For the purposes of cooking, it’s worth bearing in mind that these lentils are quite similar to the green variety, though they’re grown in a different way that is specific to their region.

In terms of flavor, they are quite unique. They’re peppery, and have a high mineral content - all thanks to the volcanic soil they’re grown in. The hearty size and flavor complement meat dishes well, or it works well as a side dish.

This type of French lentils look very similar to de Puy lentils! They have a less intense peppery taste, and they hold their shape well during cooking. Their final texture is typically pleasantly toothsome, which makes them a great addition to soups and stews.

These are generally seen as a handy, affordable alternative to Lentilles du Puy.

Also called black Beluga lentils, they are black and shiny and hold their shape well. They look quite like caviar or small black beans once cooked! Their texture is quite soft, and their flavor is quite deep and robust. Overall, they’re a good all-rounder, since they cover a lot of texture and flavor bases - they’re used for a great number of things.

Dried lentils need to be rinsed to remove any dust or dirt.. Since they are a natural product that’s often simply dried in the sun, they can accumulate some dirt during the process. Rinsing them allows you to make sure there is no grit on them. It is also a good idea to quickly scan them to make sure there is no small rocks other debris. Unlike some other dried legumes, they do not need to be soaked.

How long to cook lentils

Different types take different times to cook but as a rule of thumb, hulled varieties will take a lot less time to cook than their shell-bearing counterparts. The outer shell is what takes the longest to cook. Also keep in mind that there are whole lentils and split ones. The split ones will take much less time to cook and can be done in as little as 8 minutes.

Here’s a handy list of cooking times to keep things straight in your head.

Lentils can be precooked and kept refrigerated or frozen to quickly add to soups, stews or salads. For best results, I like to slightly undercook them al dente so they don't get mushy when I add them to a recipe.

I also keep different type of lentils frozen so they are ready to make veggie burgers or lentil sloppy joes. Just follow the cooking instructions then cool.

Store in an airtight container in your fridge for up to 3 days or store in the freezer for up to 2 months. So convenient!

Here are some of my favorite recipes.

I hope that you’ve learned enough about this legume so that you will start cooking with them more often! Check out my basic lentil recipe below. 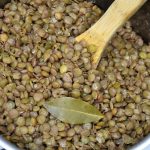 Cooking time can vary on lentils. If they are dried and bought in a package, always check the cooking time on the label. Lentils can be stored in an air tight container in the fridge for up to 5 days or in the freezer for 2 to  3 months.