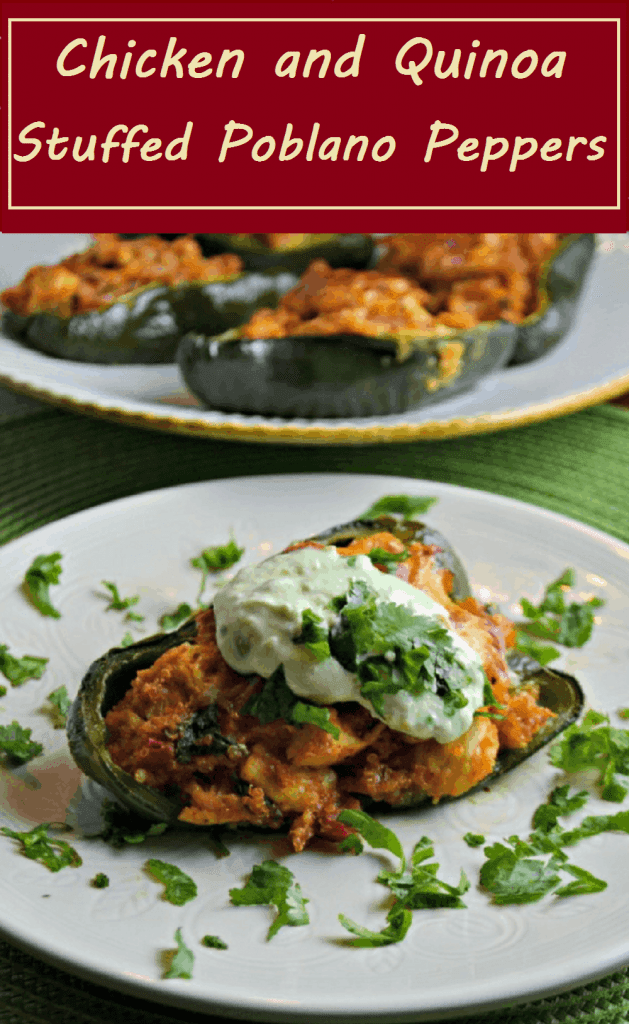 Chicken stuffed poblano peppers with quinoa are an explosion of flavor. Shredded chicken, quinoa and cheese fill mildly spicy poblanos for a Mexican-inspired feast. These Mexican stuffed peppers are also topped with a cool and creamy avocado cream sauce that will delight your tastebuds.

Many years ago a recipe for "Fake-Out Shrimp Fried Rice" landed me a spot on the Dr. Oz show.  I made a healthier fried rice dish using quinoa and shrimp along with lots of veggies. Since then I have incorporated quinoa into many of my family dinners. This chicken stuffed poblano pepper recipe has quinoa in it instead of rice. I think it's delicious this way!

Quinoa (pronounced keen-wah) is a great ingredient to have in your diet.  Technically it is considered a seed rather than a grain. It has lots of fiber, folate and magnesium along with other nutrients. It is easy to cook in advance and keep in your refrigerator. You can buy it already cooked in the frozen food department too. Just reheat it in your microwave and it's ready to use. Or you could cook a batch in your pressure cooker or instant pot and it will be all ready to use.

Eating quinoa by itself is pretty plain and boring.  It doesn't have a ton of flavor and needs to be spiced up. I like to add it to things and putting it in chicken stuffed poblano peppers is my new favorite way.

How To Make Poblano Stuffed Peppers

Poblano peppers have medium heat and are not super spicy but do have a small kick when eating them. Feel free to use small bell peppers if you prefer no spiciness.

How long do you have to bake these Mexican stuffed peppers for?

I bake them for about 50 minutes and they come out very tender. If you would like them more on the crisp or softer side you can cook them for more or less time depending on your preference.

Side Dishes To Serve With Chicken Stuffed Poblano Peppers

This dish was a meal in itself. The night we ate it, I even skipped making a salad but here are a few tasty suggestions if you've got a big appetite.

These Mexican stuffed peppers are a wonderful dinner if you'd like something a little different than your ordinary stuffed bell pepper. If you try it, I don't think you'll be disappointed!

If you like Mexican stuffed peppers, please leave a 5-star rating. 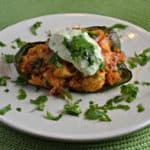