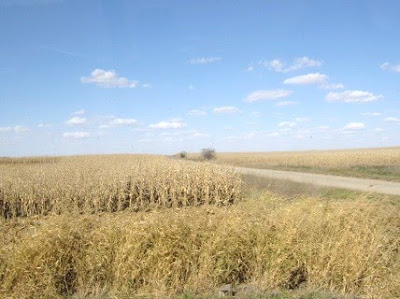 Two weeks ago, I went to Iowa with six other bloggers (Allison, Vanessa ,Laurie, Susan, Shanda, and Tanya) to see what agriculture and Iowa corn farming is all about. This trip, including hotel, meals and airfare was paid for by The Iowa Corn Growers Association. They also gave us some corn based gifts. We did not receive any monetary compensation and everything I write about my trip is my own opinion. Little did I know, but I would come home with a wealth of information about where our food comes from. I accumulated pages and pages of notes and a ton of pictures. I have been pondering over where to start writing about my trip. I felt like I needed much more than a blog post or two in order to convey all of the information I received. So in the next few weeks expect a few more posts on this great experience I had. This post will be the fun details of my trip. While this is a light post, I plan to do more posts on the corn industry, mega farming and some controversial aspects of corn based products. I welcome any questions or comments you might have as I would love to write the post with my readers questions and concerns in mind.
The first day started with breakfast where we met Kevin and Sara Ross at The Iowa Machine Shed. Kevin is a young local corn, soybean and cattle farmer. After talking to him, we learned that he wears many hats and as a farmer he takes on various responsibilities. The day before he had acted as a mechanic to fix his combine, spent a few hours as a salesman marketing his corn, then spent the evening bailing hay. Talk about a hard days work! The other thing that surprised me was that modern day combines can cost anywhere from 300,000 to 500,000 dollars. Did you know that? It was a very informative breakfast and Kevin and Sara had their beautiful ten month old baby with them. He was such a joy to watch. From talking with Kevin and Sara, you could see they were passionate about what they do. The Iowa Machine Shed was a great place for breakfast and they had the hugest cinnamon buns I've ever seen. 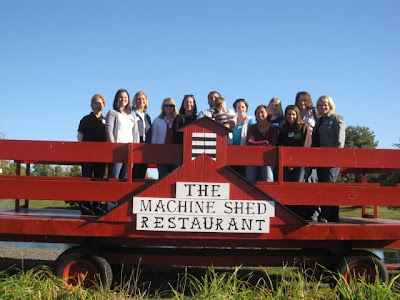 Next we went to The Living History Farm, a 1900 farm museum and then to Causer's Cattle Farm, a modern day 2010 cattle farm. At the living history farm, we were able to see how corn was processed back in the 1900's. Here is Bill, their number one helper. He is mighty strong and big. Bill is a Percheron work horse which was a popular breed in the 1900's. 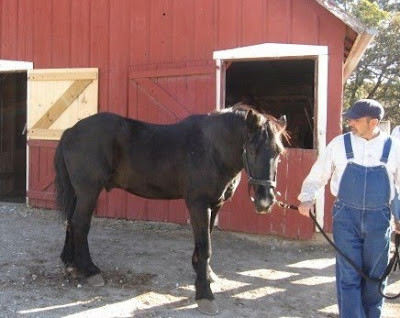 We also were able to see how corn is shelled with an old time hand grinder machine. That was a work out in itself! We also met Bill, an old time farmer in his 80's. He was a cute man and had plenty of "back in the day" stories to tell us. 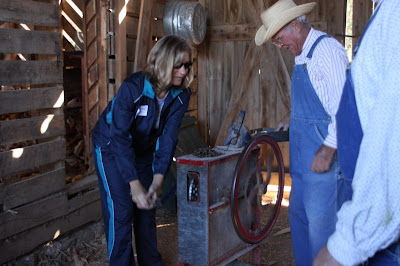 My favorite part of The Living History Farm was seeing what a kitchen looked like. Hillary ran this kitchen and told us many interesting facts. We learned that ham could be stored for 6 to 12 months without refrigeration. Eggs also have a protective coat on them where they can last for 6 weeks without being refrigerated. But eggs need to be refrigerated in modern day as the protective coating is washed off. Typical meals in the 1900's consisted of a big roast of chicken or beef, potatoes and vegetables. This food was used for the rest of the weeks meals. This is why croquettes, meatloaf and casseroles were popular. There was no waste of food. 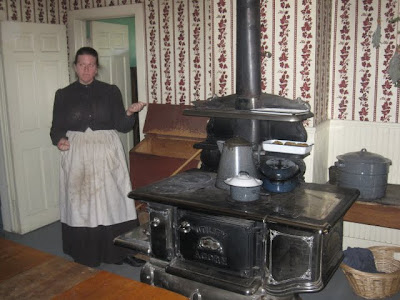 Next we moved onto Causer's Cattle Farm. We met Bill Causer who talked to us about what it was like to run a cattle farm. We had a lunch consisting of flat iron steaks, corn and salad in his "man cave". I loved how Bill called us "the seven housewives". We also gathered some information on the beef industry, caught a glimpse of the cows and then we actually were able to ride in a combine to see how corn is farmed. 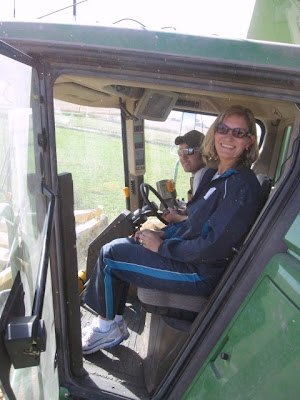 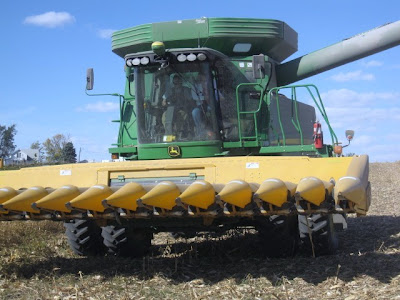 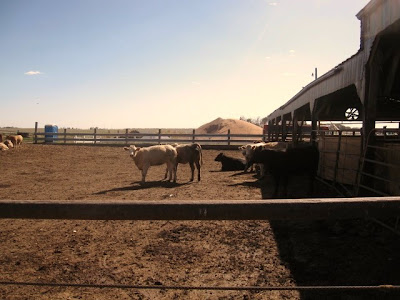 Then we went out to the Iowa Speedway to ride in an ethanol powered race car. I rode in a pace car with speeds over 109 miles per hour. What a thrill! It was too fast for pictures!
Next we went to Jasper Winery, a local winery where they served us some great local wines and a nice dinner. The next day we had a question and answer session about food with Dr. Ruth MacDonald from Iowa State University. Dr MacDonald was a bundle of information and I will include what I learned in my next post. To wrap things up, we prepared a gourmet meal at Ardor Kitchens with Chef Terry Kohl and used some local products that were grown in Iowa. I will definitely include some of the recipes we made in another post. It was one of the most delicious and hardy lunches I've ever had. 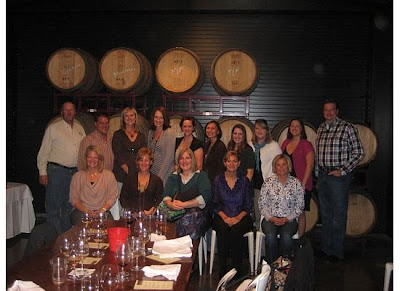 The trip was an experience I will never forget. I am happy to have pictures and a story to tell my family. It was great to see the farms and farmers that are behind the food we eat. I don't think I could do more in a span of 48 hours.
Until the next corn tour post................And don't forget to leave comments and questions. Feel free to also email me personally at jerseygirlcooks @ comcast dot net.
« Food Fun on the Iowa Corn Tour!
Best of the Best Blueberry Muffins »