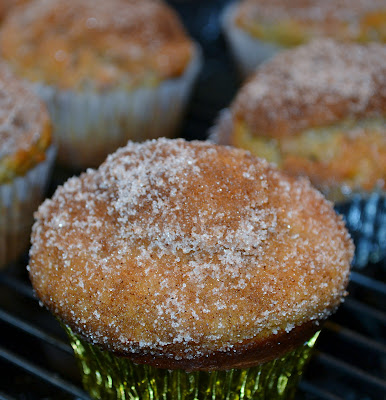 Mmmmmnnnn, cinnamon donuts! Who doesn't like them? I know I do and so does everyone else in this household. Last week when I happened to see this recipe on Mom's Cooking Club, I bookmarked it right away. They were as good as I expected them to be. They tasted just like the old fashion cinnamon sugar cider donuts that I can get at the farmer's market. I made a batch for my daughters dive meet and the family was not happy that they were carted out of the house. I did get to try a bite of one. Now I must go and make another batch for the family. Come back later this week for a great kid's giveaway!

2 cups flour
1 tablespoon baking powder
½ teaspoon baking soda
½ teaspoon salt
1 teaspoon cinnamon
2 large eggs
1 cup plain yogurt (I used low-fat plain yogurt)
⅔ cup packed brown sugar
4 to 8 tablespoon oil ( I used 4 tablespoon oil)
1 teaspoon vanilla
Topping
½ stick butter, melted
¼ cup sugar
½ teaspoon cinnamon
Position oven rack in the middle position and preheat oven to 400 degrees. Line a standard muffin pan with paper cups. Whisk flour, baking powder, baking soda, salt and cinnamon in a large bowl. In a separate bowl, whisk together eggs, yogurt, sugar, oil, and vanilla. Add flour mixture and mix with light strokes until the dry ingredients are just moistened. Don't over mix; batter should not be smooth. Divide batter among the muffin cups and bake until a toothpick inserted in one or two of the muffins come out clean, 12-15 minutes. While the muffins are baking, melt ½ stick butter and place in a bowl just large enough to hold a muffin. Combine sugar and cinnamon in a small, shallow bowl. As soon as the muffins are done, dip them one at a time in the melted butter and then roll in the sugar mixture. Set on a rack to cool.
« Blueberry Buckle
Tangy Blueberry Almond Broccoli Slaw »