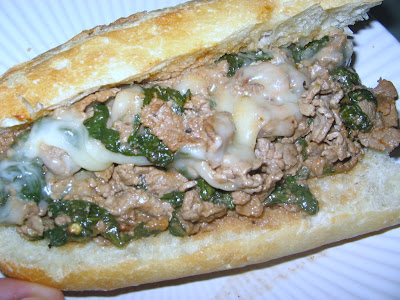 On Thursday night, we were getting ready to watch the Rutgers football game. I was debating what to cook and decided to go with a good ol' cheese steak. Since we live so close to Philadelphia, you know we can order them from anywhere and they will be good. But I decided to go the homemade route and I made the husband very happy. It also cut down on grease and possibly a few calories.
I am not saying these were anything close to diet food but they did include some veggies and lean meat. I bought some chip steak which was really thin sliced sirloin and added some spinach to the mix. This Italian style cheese steak was so good. Of course, the bread made the sandwich. While Rutgers was scoring 49 points in the first half of the game, we were chowing down. If you don't live near Philadelphia but would like a great cheese steak, follow this recipe. 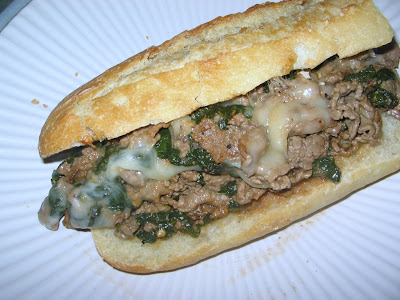 Italian Style Cheese steaks
1 TBS olive oil
1 medium onion, thinly sliced
16 oz chip steak or thinly sliced rib eye
1 teaspoon garlic powder
8 ounces baby spinach
¼ cup tomato sauce
a pinch of crushed red pepper
salt to taste
2 large Italian hoagie rolls, split
6 slices sharp provolone cheese
In a a large fry pan, heat the olive oil and saute onions until they start to turn golden. Add chip steak and cook until no longer pink. Add garlic powder, spinach and sauce to the pan along with the red pepper. Cook until spinach is wilted and stir well. Season with salt to taste. Lightly toast the inside of the rolls and divide meat mixture on the two rolls. Top with provolone cheese and melt under the broiler for a minute or until cheese is melted.
« Messy Meatloaf
Pretty Cookies »