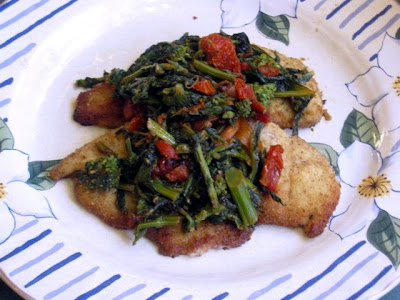 Tonight was another night where I needed a lightening quick dinner that was healthy but easy to prepare. There are certain must have ingredients required for me to make a meal in under 30 minutes. One of them is thin cut chicken cutlets. I am a fan of cooking chicken however touching raw chicken is kind of gross to me. So if I can get cutlets that I don't have to pound, I am all for paying the extra dollar. When they are on sale, I feel like I've hit the jackpot. Lucky for me, the thin cutlets were on sale this week and now my freezer is well stocked. Look at these babies cooking! 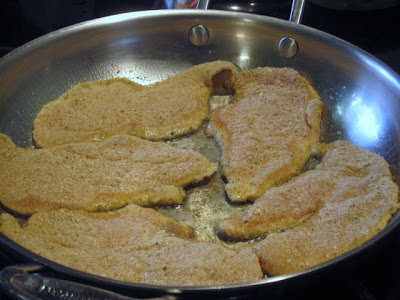 This morning I knew I would be making chicken cutlets for dinner but it wasn't until 5pm that the light bulb went off. I looked in the fridge to see a large bunch of broccoli rabe and a bag of sun dried tomatoes in my produce drawer. Visions of a Philly style sandwich on a large hoagie roll with extra provolone started dancing in my head. And then I bent over to pull the produce out of the bottom drawer and felt my tight jeans start cutting off some circulation. There would be no hoagie roll or cheese for me. Instead I would make some lightly sauteed cutlets with the broccoli rabe and sun dried tomatoes served with a green salad.

The best part about this meal was that everyone in the family enjoyed it. The kids ate plain cutlets and the hubby and I had plenty of veggies on our chicken. My husband declared he would eat this every night. I am sure he would have given me extra bonus points if I smothered it with cheese and put it between a nice Italian roll but I am happy that my jeans might be a little looser at the end of the week. 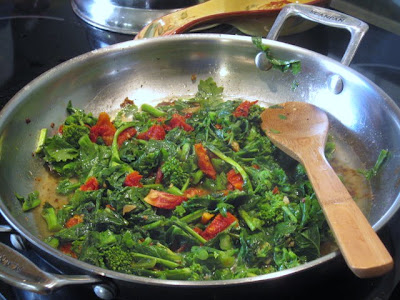 Preheat oven to 300 degrees. Dredge chicken cutlets in bread crumbs. Heat 2 TBS oil (reserving 1 TBS) at medium heat in the largest frying pan you have. If the pan isn't big enough, you can cook the chicken in batches using half the oil at a time. Cook the cutlets for 2 to 3 minutes on each side or until cooked through. Keep the chicken warm in a pan in the oven. Heat the remaining oil in the pan and add the broccoli rabe, garlic and sun dried tomatoes. Cook for 3 minutes or until starting to wilt. Add the broth and balsamic vinegar to the pan. Cook for another 8 to 10 minutes or until liquid is evaporated. Add salt and pepper to taste. Serve on top of the chicken after it is removed from the oven.